On How Runner's Save the Rest of You

On the strange weather front. I went from running in 90 degree weather to taking last Saturday's long run of 7.5 miles four days later in the cold and rain. It was 50 degrees when I launched in Shingletown for a trail run.

The run went fine, and, as promised, I did wolf down thirteen beers at the barbecue which followed. And, yes, I know it sounds juvenile to count the beers you've consumed, but I'm in training, so I do what I want. This also explains why I ran my last marathon at 192 lbs. I'm at 202 lbs now, so I've got some beer drinking ... I mean ... training to do.

The point was made to me that the excessive beer drinking cannot count as carbo-loading because it occurred post-run. I can't refute such logic, so I'll use my attorney-wits (the California State Bar provides these as a "reward" for enduring their hellishly foolish bar exam). I therefore fall back on my counter-argument that I meant that the carbs were intended to replenish those used during the run. That extra beer (the 13th) was for the effort it took to spank a naughty kid and tie my shoes immediately before the run. That was exhausting.

Also, Dad, you may send the "watch out for becoming an alcoholic" warning by text.

On a serious note, the song highlight of this run was Billy Joel's "Goodnight Saigon". Kids, Billy Joel is a middle-aged singer popular in the 70's and early 80's. He's most noted for having super-buggy eyes and marrying a super-model (Christie Brinkley). I guess his lusty stare must have finally spooked her because she dumped him several years ago. Anyway, the song is about Marines in the Vietnam War. That led me to thinking about the people I left behind when I left CBC Port Hueneme. Here's the emblem for the Fighting Seabees:

I was a JAG at CBC Port Hueneme and not a Seabee, so I can't claim the "We Build, We Fight!" motto. I suppose the JAG motto would be "You Fight, We Prosecute". It is also true that the "fighting Seabee" didn't intimidate many of the Japanese soldiers during the Pacific Campaign of WWII. However, I've got to admit that a bee holding a machine gun is more interesting than the "Rising Sun" the Japanese carried into battle. Come on, Japan! Couldn't you put a Samurai on your battle flag - or maybe a picture of a shot of Sake. Here's Japan's boring flag:

I do want to inform the public of the many benefits runners provide to you. For one, you may have heard about the wildfire started by a golfer who caused a spark when he hit a rock with his club. Well, runners don't start wildfires.

Runner #1: Hey, lets go, we've got 7 miles to cover before we go to the barbecue and get drunk!

Runner #2: Be right with you, just going to kindle a fire before we get started.

Runners also habitually look along the side of the road as they jog. This means that we discover dead bodies and the like - a worthy public service. It is also well known that there is a worldwide quota on the wearing of track suits. Put another way, if Al Davis and all the runners in the world don't wear the track suits, it means some of you will have to. As for the skimpy running shorts we wear, they are super-sexy and the envy of all the people I train with at Team Quest. Just ask them, and they will tell you how they highlight my muscled thighs and sculpted calves. Just ask ...

Lastly, what better way to demonstrate your public service as a runner than to solve the world's food shortage crisis by being so damn skinny (myself excluded). This formerly beautiful girl did her part for you as part of her marathon training: 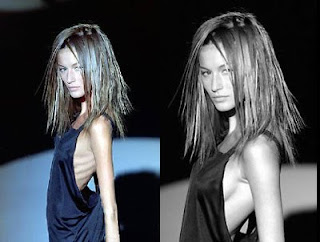 And, to show that it isn't just the women doing their part, the men participate too: 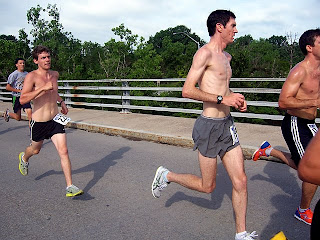 The downside is that runners, as a rule, tend to distract drivers with their strange appearance (see the picture of the shameless guy above). I imagine this leads to traffic accidents, accidental choking by children in the back seats of cars and the like. In high school we had a girl who would bawl like a baby during her mile event at the track meets. Dammit, Heather, if it bothers you so much take up bowling! WTF, who the hell said you could cry! What do you really expect from a runner? Don't tell me you think the guy in the picture above isn't going to cry like a baby when he's done running.

Moving on ... this Saturday's run is a wussy run. Low on the mileage (4 to be exact) because this is a taper week. Two weeks, I increase mileage and on the third week, I tool it down. Marathon training in a nutshell folks.

Because the run is so short, my Ipod playlist is rather short. The only song of note is "The Pina Colada Song" ... you know "Do you like pina coladas and getting caught in the rain..." What a bunch of cheesy sh*t, and Rupert Holmes should be shot for being so damn pathetic that he had to write a song that with each verse screams out "I'm not a man!"

So, on this week where almost everything sucked, I'm hoping that "The Pina Colada" song will remind me that not all is bad. Mr. Holmes turned in his man card after he wrote that song. Mine is still comfortably in that tiny girly little pocket they make for the skimpy running shorts.

Posted by SmackusMaximus at 12:14 PM