Greetings to everyone! I'll start with a synopsis of last Saturday's long run of 4 miles. If you recall, last week was a taper week. Supposedly, it meant rest, more time with the kids, warm comforting romantic thoughts of getting away with the wife and the like. Instead, it meant that I did way too much work-related worrying, not enough jiu jitsu, not enough drinking and not enough running. So, was I excited to run my 4 miles? Yes!

Then it sucked. Oh boy, did it suck.

I now have a loathing of Lema Ranch which no amount of Maker's Mark can erase. It was 66 degrees when I left my comfortable abode in Shingletown and, by the time I finished running Lema's asphalt paths around weed patches and assorted murky lakes, it was 93 degrees. When such extremes occur I typically rely on some music to set me straight. Well, that Pina Colada song didn't do the trick ... it just pissed me off. How dare that guy sing about Pina Colada's when I'm needing a drink and trying to avoid stumbling into a patch of star thistle. You know, these frickin stupid weeds: 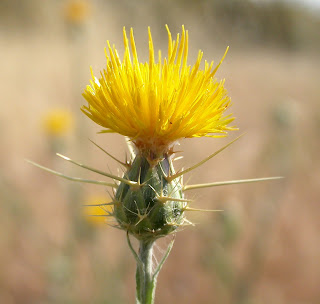 That concludes my rundown (pun intended) of last Saturday's debacle. Needless to say, I finished this run only to be late in picking up my wife from Sun Oaks. Did I mention the gastrointestinal issue I had on my run? Imagine that potty stop ... well, don't actually. My reward? A disapproving look. At least she didn't hit me.

I ran five miles on Monday, and it was much, much better. During that run, I was thinking about how good it will be to run a marathon again. I'll get a medal, the universal esteem and respect of my children and wife (yeah, right), and I'll probably even finish it strong.

One thing that occurred to me in my confident state during that run was that the first marathon didn't turn out so good for a certain Greek named Phiddipides. If you've ever wondered why a marathon is precisely 26.2 miles it is because that is the distance that poor Phiddipides had to run from the Plain of Marathon to Athens. Phiddipides ran to Athens to provide the good news of a victory against the Persian invader at Marathon.

Ah, Athens ... the same people that made Socrates drink poison and die just because he asked too many annoying questions and had bad breath. Seems like the Athenians could deserve some late news ... or at least inaccurate news like the Record Searchlight provides. Back to the story ...

Phiddipides ran his ass off in his sandals all the way to Athens and blurted out his good news only to die immediately thereafter. Yes ... like certain 4 milers, marathons can kill. I've often wondered why Phiddipides ran himself to death to give good news. Seems like good news could wait a bit. Why not stop at a couple of taverns on the way to Athens? You could ogle a couple of greek girls, brag about how you killed at least 20 of the invading Persians and drink some brew.

Phiddipides: Hey baby, bet you five drachma you can't guess what I've got under my toga?

You could while away the whole day playing that game in a tavern. Trust me, I've tried it. Seems like the bad news like "The Persians are coming to kill us all!" should induce a bit of haste. But no, Phiddipides foolishly sprints forward to die to bring tidings of great joy (Christmas reference intended).

Take a look at this classic painting of Phiddipides delivering the good news to Athens: 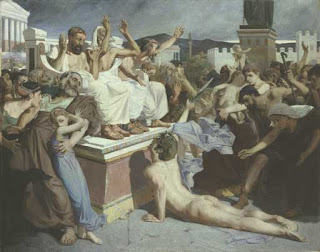 A couple of questions 'cause I'm confused:

1) What the hell happened to Phidippides' clothes? Why are the Athenians clothed? Is this some kind of Greek messenger thing? In modern day Greek messaging, is nudity required if you send a fax but you must be clothed to receive the same fax?

2) Why aren't the people happier? You'd think they'd show a bit more joy in getting to avoid that whole unpleasant killing and rape thing that the Persians liked to bestow upon the Greeks.

3) If not happy, they look surprised. Is that because Phidippides feels it necessary to demonstrate naked yoga moves while giving out the good news?

4) Is Phidippides about to get groped by that chick that is reaching for him? I think, Yes. Is that guy in the brown toga on the left leaning back so he can get a better look at Phidipides' ass? Once again ... it looks that way.

As all of this relates to me, I'm not sure if I should be thinking about getting naked prior to finishing my marathon at the Sundial Bridge? If I go all-Phidippides, will some lady try to grab my bum? In Redding, no, its straight to jail. In Chico, my chances are fair. In San Francisco, I'm a lock for a bit of tushy grabbing.

I think I need a palate cleanser. Kids, avert your eyes, because this picture has each of the Pink Floyd albums painted on the naked backside of an attractive woman. 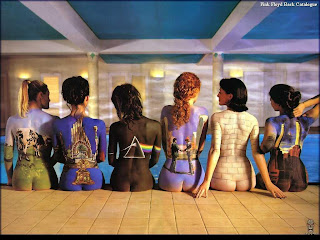 Men, can you sense that disturbing image of Phiddipides leaving your mind? Good. Glad I could be of help and my favorite is the one painted black with the Dark Side of the Moon album cover painted on. Second place goes to the girl on her left. You are clever if you have noticed my brunette theme. Doesn't that feel nice to be called clever in a blog?

This week's long run is a 7.5 miler. I will be lacing up my shoes to a pretty good playlist. Notable mentions are:

Mother by Danzig: Kind of a weird vibe I get from Danzig. The lead singer is one hugely muscled dude emoting all over the place about his mama. I don't know whether to respect him or slap him. Generally, heavy metal conjures images of guys with greasy and/or heavily hair sprayed locks with about as much muscle as is necessary to lift a joint or perhaps (on good days) a light beer.

1973 by James Blunt: James, in 1973 I was 5 years old. Even I didn't dance in night clubs with beautiful models at age 5. You certainly did not because you were not yet born. What gives?

Here's hoping that all of you enjoy your weekend. Tomorrow is September 11, 2010, so spend some time in prayer. While at it, pray for me on my run. If the ghost of the 4 miler returns for this 7.5 miler it will probably end up in me doing some naked yoga a la Phiddipides ... and that can't be pretty.
Posted by SmackusMaximus at 12:13 PM