The Great Pumpkin & Messing Up Sex With Running

My apologies for being so tardy in keeping up on the blog. Since I last blogged, running has happened. Lots and lots of running ... some of it including a half-marathon with my wife's cousin (therefore, MY counsin). First time in this marathon training that I've taken a step in tandem rather than solo.

We are well in to October now, so I hereby declare the official start of the Halloween season. That's right, I've made it a season at my house starting on October 1st and ending on the Feast of All Hallows (that's Halloween for my non-Catholic readers). The best part of this "Great Pumpkin" season is, of course, the Charlie Brown movie itself. 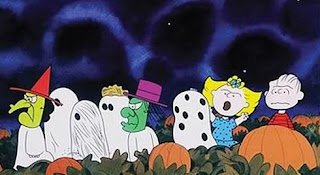 A couple of things about The Great Pumpkin have me very confused. Who the hell gives a kid rocks on Halloween? That is seriously f**ked up! So some depressed, bald-headed kid has cut too many holes in his ghost costume, and it's o.k. to throw some granite in the kid's bag? Did the whole neighborhood have a pre-Halloween meeting just so they could f**k with poor ole Charlie Brown by giving him rocks? Yes. Of course they did. They all conspired to give that nice boy rocks in lieu of candy. If it wasn't bad enough that the kid is in 4th grade and still won't grow hair, he also gets a neighborhood beat down on the second best kid holiday in the whole kid year.

Why pick on Charlie Brown? I can think of at least one other Peanuts character that could use some granitic candy. For instance, how about Marcy? Where does she get off calling Peppermint Patty "Sir"? Thanks to Marcy, I was confused about Peppermint Patty's gender for years. I still am if I want to be entirely honest.

To this day, I can't tell if Charles Schulz was way ahead of the gay rights curve with this whole Peppermint Patty thing or if he just liked to confuse kids. Given the near-human beagle masquerading as a WWI flying ace; the advent of a "Great Pumpkin" that can somehow fly, dispense candy and judge the souls of children based upon the totally unrelated and morally neutral "sincerity" of their pumpkin patches; the depiction of adults that say "wah, wah, wha wha" instead of talking; and the aforementioned trick or treating abuse of Charlie Brown, I think Schulz was all about confusing the kids.

Folks, confused kids grow up into confused adults. As adults, we learn that the combination of things you really enjoy can end up being woefully wrong. A quick example, whiskey and gun play.

Now for the Question & Answer part of the blog to help demonstrate this principle:

Q: Are many women super sexy? Q: Can this female sexiness be increased exponentially by the addition of black leather stiletto heels? 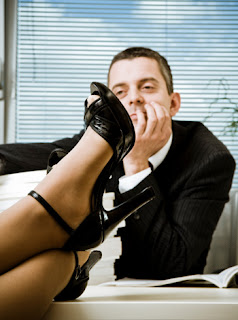 Q: Is there anything wrong with mixing women, stiletto heels and running? 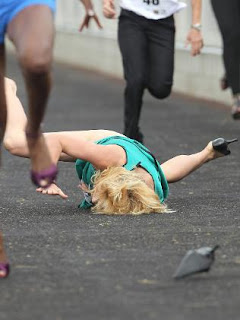 Just look at the picture! This poor lady has launched a stiletto heel about 15 feet over her addled head. Think of the road rash on her thighs and face. Damn it! It's just wrong. If a guy did this to this poor woman, all society would encourage and condone all sorts of torture as his recompense. But, what the hell do you do with a woman who has brought this on herself just for the glory of ... oh, I don't know ... winning a $25 dollar WalMart gift certificate? Is there some kind of mid-point between heaven and hell for such people?

We should not ... No! We must not confuse sex and running! It just leads to disappointing results and unintended consequences. Come on, America! Fix this so that it doesn't happen again!

Let's briefly run through some highlights on the playlist for this Saturday's 12 mile run from Palo Cedro to Caldwell Park in Redding. Notables are:

Lithium by Evanescence: There's just something about a girl dressed up like Lilly Munster singing with that awesome voice that Lilly ... I mean Amy Lee ... has. Perfect for the Halloween season, and I do find that operatic/Munster thing Amy Lee does kind of sexy.

Screaming In The Night by Krokus: This get's my "I'm a douchebag award". I distinctly recall getting drunk with my wife's cousin at the home of some female friends of ours and singing this song to them about five times in a row.

Me (in slurred voice): Eric, rewind that again! That was awesome!

Together in Awesome Singing Voice: Screaming in the night, fighting for my life, I'd die for you...

(Rewind and repeat at least five times). Oh, the horror ...

Posted by SmackusMaximus at 12:19 PM 2 comments: